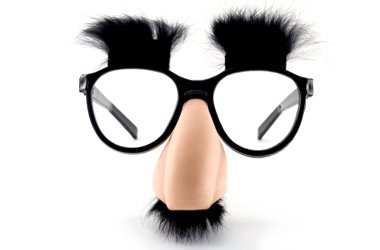 It's so awkward talking to God through a mask.

Suppose you were casually hiking through the woods on a trail at the local park. Suddenly you see a fellow dash out of the underbrush in front of you. He quickly stops, acts nonchalant, and cheerfully greets you. Concerned, you ask what or who he is running from. He replies, “Oh, I’m not running.” Somehow you don’t believe him. The sweat pouring off his forehead, the deep breaths, and the fact that he is obviously dressed for activity all give an indication that indeed this fellow was running. But he acts calm, relaxed, and friendly as if he had also been casually walking along on the trail.

Let’s face it, at some point in our lives we’ve all looked at God, put up our hand, said “no,” and took off in the other direction. That’s not just a Jonah thing. From that point forward, it’s a game of cat and mouse. And the expression “you can run but you can’t hide” is very true.

Running in a direction other than with God gives you a never ending feeling of fear. You feel the constant need to look around. You are startled easily. You are sensitive and defensive to certain people or topics.

Sometimes when we run we find it necessary to wear a disguise. Sometimes we do a good job at that. We fool others, but remember we never fool God. But it would be terrible to let others see what’s behind the mask, right?

Plainly put, our disguises amount to pride and idolatry. If pride is holding us back, then our reputation is an idol. Therefore, since idols are fake, our reputation is fake. Oh, but it’s easier to have a good fake reputation than a scared real one, right? I’m not so sure. If our reputation is attractive, but fake, we are missing out on true freedom. So everyone who’s been there knows what it’s like to be running from God in fear or shame but running to Church so no one gets suspicious.

An account in I Samuel 19:11-18 caught my eye the other day. It kind of struck me funny.
“…and David fled, and escaped that night. Saul also sent messengers unto David’s house, to watch him, and to slay him in the morning: and Michal David’s wife told him, saying, If thou save not thy life tonight, tomorrow thou shalt be slain. So Michal let David down through a window: and he went, and fled, and escaped. And Michal took an image, and laid it in the bed, and put a pillow of goats’ hair for his bolster, and covered it with a cloth. And when Saul sent messengers to take David, she said, He is sick. And Saul sent the messengers again to see David, saying, Bring him up to me in the bed, that I may slay him. And when the messengers were come in, behold, there was an image in the bed, with a pillow of goats’ hair for his bolster. And Saul said unto Michal, Why hast thou deceived me so, and sent away mine enemy, that he is escaped? And Michal answered Saul, He said unto me, Let me go; why should I kill thee? So David fled, and escaped…”

Here was David, running from Saul in fear of his life. While David was not running from God, I’m using it as an example of running and disguises. And since its Halloween, I thought it was a good time to post this.

Are we putting on a front of peacefully resting in bed when in reality we are secretly fleeing for our lives? When Satan, our flesh, and the world are attacking us, do we pick up a Bible or go to prayer meeting to make it look good and fool everyone, including ourselves? Maybe you are “so much cooler online” than in real life. Maybe people look up to you because you are minister, teacher, blogger, deacon, married, or whatever it is they look up to you for. Are you in a hospital bed or wheelchair taking selfies of a smile that looks great?

Brothers and sisters, God is building your character. Run to God; cry out to Him as David did the Psalms. God is going to use you in significant ways in His kingdom.

I know the lure to run from God and to temporal pleasure is incredibly strong. I also know the feeling that immediately follows. I become frustrated that I’ve actually done this, which leads me to callousness and an even stronger push away until I’ve exhausted myself and am ready to surrender again. At that point I know I must cry out to God. That point is so embarrassing.
But guess what. Even if you have been running away, it’s not as embarrassing as you may think to slow down, stop, turn around, and go back to Him. Yeah, He’s right there. Turning back to Him is not something to fear. Yes, God is an almighty judge, but that’s for those who run, not for those who humbly come to Him.

It’s so awkward talking to God through a mask. So take off that mask. Stand still, and look God straight in the eye for once. Talk to Him. Take care of your life and the things that have kept you from Him. Ask Him to forgive and help you. And if you’re worried about people not recognizing you anymore, don’t worry. They’ll know you are genuine, and I think they’ll like the new you much better.